This year, the invasion of Ukraine brought sharp focus to the global wealth that has surged into British real estate over the last few decades. Around the time of the invasion, calls from across British society to seize oligarch owned property came from what might have previously seemed like unlikely sources. Tories including Michael Gove, and newspapers such as the Daily Mail were vocal in setting out the case for state sanctioned requisition. There was also direct action by anarchists taking over 5 Belgrave Square, a £25 million London mansion owned by Russian oligarch Oleg Deripaska. It felt like – if only for a brief moment – we had arrived at something a national consensus.

Alongside sanctions on a dozen Russian oligarchs in the UK holding an estimated £800 million of property came separate UK government measures focused on Roman Abramovich controlled Chelsea Football Club. These sanctions drew attention to how sport assets have played a similar role to property assets for the international capitalist class as safe investments, status symbols and public relations tools. It’s no wonder the UK has been called the ‘playground of the super rich’. Action against Chelsea also generated questions about why authorities were more comfortable with the ownership of Newcastle United by the Saudi Public Investment Fund (PIF) and Man City by Abu Dhabi United Group (ADUG). Given the leading role of Saudi Arabia and Abu Dhabi in the war in Yemen, leading to humanitarian disaster and accusations of war crimes, surely the same principles could be applied to these state-capitalist actors as the Russian super-rich?

Elite and state owned financial vehicles from Saudi Arabia and Abu Dhabi, like Russian oligarchs also own huge swathes of real estate in the UK. This has been an explicit strategy of economic diversification out of the oil and gas economy into other sectors so that the petro-wealth of these states ensures control for generations into the future. According to S&P Global Ratings, Abu Dhabi generates about 90% of its income from oil and derives 50% of its $260+ billion GDP from crude. Some of the flows of finance from this extractive industry are being invested into sports and property assets not just in London but increasingly across the UK.

In Manchester, finance from Abu Dhabi has had a dramatic effect on the city beginning with the football club but soon flowing into property. In a report we released earlier in the year we analysed the partnership between ADUG, a private equity group with close ties to the Emirati state and the Labour run local authority to build over 1,500 apartments. The results were worrying as the partnership has effectively offshored parts of the city. This included 999-year leases of land transferred at what we assessed were significantly below good value. The partnership has also directed all the sales and rental income, estimated at £125 million and £10 per year respectively, toward the Abu Dhabi partners (the council say there is a profit-sharing agreement but this still hasn’t been disclosed). This is despite the Manchester Life company supposedly being a joint venture, and the public loans, previous investments in the area totalling tens of millions, opportunity to avoid affordable housing contributions and local expertise that were provided. 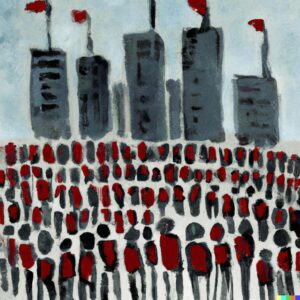 Crucial to the operation of the partnership has been the use of a string of companies controlled by the Abu Dhabi investors in the Crown dependency tax haven of Jersey. Locating control offshore has also allowed the partners to avoid transparency about where the millions made in rental and sales income ultimately flow. What seems clear though is that Sheikh Mansour bin Zayed Al Nahyan, one of the most powerful and richest figures in the UAE is set to benefit financially from new housing development in Manchester. This was a deal negotiated by the chief executive at the council, with UK government encouragement who then went on to work for the City Football Group. Given what one rival developer called a ‘sweetheart deal’ it left us questioning in whose interest Manchester City Council have been working for, the Abu Dhabi state or local communities?

Economic considerations are not the only reason why Gulf state elites are investing in British cities and buying up sports and real estate assets. As I’ve previously argued entities such as ADUG and the Saudi PIF are involved in sports and city-washing, laundering international images of authoritarian regimes through entanglements into public institutions to shape positive public relations. In Manchester this has involved not only the football club and the local authority, but also the university, the Co-operative Group (who sponsor a part ADUG owned arena), and a housing association. In the report we call this a soft power strategy that is intentionally aimed at gaining public support and access to local power brokers; so that local institutions yield to their interests.

The UK government remains unlikely to appropriate the assets of the Gulf elites, as they have threatened to do with the Russian oligarchs. What can we do then about these worrying investments in our cities that seem to serve both economic and geo-political objectives? In our report we don’t just document the workings of the ADUG/council partnership and its implications for places such as Manchester and Newcastle. We also think about how we might move beyond this pattern of extractive investment to seize back the city.

One initiative we recommend is to establish Public Transparency Boards (PTB’s) made up of financial procurement and public interest experts in the voluntary, corporate and academic sectors. PTB’s could bring some level of democratic control and public transparency into the investments into our built environment. These PTB’s would be particularly powerful in scrutinising the increasing turn by local authorities to the finance sector and how this has enabled an assortment of global actors to become involved in urban development. In order for this new transparency to be effective beyond direct local authority partnerships, such as the Manchester-Abu Dhabi deal, the planning system would also have to be restructured. We suggested that local planning decisions could now be predicated on ‘fit and proper tests’ undertaken by the PTBs that have power to stop urban development in its tracks if owners do not pass agreed public standards incorporating both financial and ethical concerns.

If the PTB’s and changes to the planning system can stop future flows of finance into new urban development it is through the tax system that we must increase pressure on the existing assets owned by the global super rich. A new property tax could be levied on international real estate holdings at a high level. In the short term this would raise massive income for the state to be reinvested into addressing the housing crisis. In the longer term this levy would deter those that have used property in cities such as London as safety deposit boxes. Changes to the tax system would also require closing down of Crown dependency tax havens such as Jersey to further shift UK cities away from being spaces of extraction for global capital rather than producers of local value.

Targeting the wealth of the Russian oligarchs should just be the start of attempts to address the money that has long flowed through the built environment and the British politicians and policymakers that have encouraged it. As the Manchester Life deal shows our cities are intimately entwined in global real estate networks and elite and powerful figures such as those in Abu Dhabi. We need a public conversation about how to seize back our cities. Our work shows both why this is necessary and recommendations to opening up transparency and shifting away from this extractive, troubling model across the urban development process.