On a clear day, an investor buying into Manchester’s booming penthouse lifestyle could look out and survey the magnificent view from their floor to ceiling window. As the city stretches out before them, they might just spot in the far distance a matrix of circles and crescents, hubs and spokes, all interspersed with green. These mark the distinctive low rise housing estates built by the Manchester Corporation during the 1920’s and 30’s. These are the Corporation Estates, homes built for the working class. They are the high watermark of Manchester’s Municipal vision, and the resources the city could harness to rewrite the story of housing for generations of its citizens.

As you leave the city centre and travel south, down the long stretch of the A34 known as Kingsway, you pass rows of uniform brick-built houses which welcome you to Burnage.  It’s remarkable today to think that in under 5 years Manchester Corporation managed to build over 3,700 of these sturdy, well designed family houses, on farmland bought in 1923 from Lord’s Egerton’s vast estate.

For the last 2 years, we’ve been working on a Heritage Lottery funded project:  “Burnage: A Place Called Home”, alongside local tenants and volunteers. We’ve delved into the archives to uncover the history of their construction, and collected oral histories, photos and recollections to explore how people built a community from scratch and made it their home.

A resident still living in the house he was born in in 1927 told us about the contrast between the Corporation estate and the family’s former house in Earl Street, Longsight.

“Our old house, it was a very poor house, it was a slum really. My Father called it “The Hovel”. The grate fell off the wall and nearly killed my brother. When we got the Corporation house in Ferndale Gardens off Kingsway we thought it was heaven on earth.”

Medical concerns over the state of the nation’s health, rising militancy among the organised tenants movement, and establishment panic over the threat of Bolshevism, underpinned the speed at which the housing act of 1919 was passed and how the political will to build “Homes Fit for Heroes” came to be. Working class servicemen returning from WW1 to districts like Hulme, Ancoats, St Clements, Collyhurst, Ardwick and Gorton faced overcrowded and insanitary conditions. Diseases of poverty and poor housing such as tuberculosis, respiratory illnesses and infantile diarrhoea persisted in many districts, and homeless families lived in former army hutments in Heaton Park until well into the late 1920’s.

The need to build quality housing at volume was met by subsidies from central Government through subsequent Acts of Parliament. On estates like Burnage, the two and three bedroomed cottage style homes were built 12 to the acre, in line with high standards set out in the Government’s 1918 Tudor Walters report aiming to maximise light, ventilation, privacy and space for growing food. The estates were laid out with green spaces set aside for allotments, play and recreation. Carolyn McKenzie moved in in the early 1970’s

“I remember coming up in my stepdad’s van for the first time when we moved in and I couldn’t get over people having a garden. ‘Cos where I’d grown up — in Chorlton on Medlock — it was just a backyard and an outside toilet. It was the green — I know that sounds silly but everywhere was green… and trees."

Despite their cottage appearance, the houses were decidedly modern. Indoor toilets and bathrooms were fitted as standard. The Corporation generated and supplied gas and electricity and arranged for 50 of the Burnage houses being fitted out and furnished as “all Electric” in 1924. Details of the interior design were influenced by the findings of the Labour Women’s Sub Committee on Housing — drawing from hundreds of interviews by women’s organisations  — and pressed for labour saving devices like gas fired washing boilers, drying racks, built in cupboards and indoor coal storage. 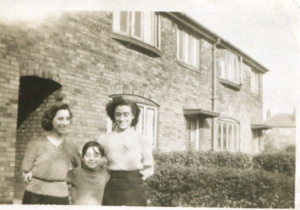 The rents weren’t cheap though, and it was a stretch for many to find it. In 1929 the rent for a Corporation House was nearly £1 a week — about a third of a working man’s wage. But for many, coming out of the precarity of living under slum landlords, this rent was worth paying. Chris Drew’s father grew up in Ardwick and Gorton and moved his family into Burnage in 1929:

“What was always seared in his memory was not having security — he used to make light of it but it made an impression on him. He would come home from school and find a cart in the road with all the family possessions in it, because they’d been evicted. I remember him being religious about paying the rent every week. Food came second. “

Since the 20s, life on the Corporation Estates were shaken by seismic events, as the world — and the city — changed. The financial crash of 1929 and the Great Depression that followed it saw poorer families evicted from Corporation housing, and others priced out. Many were forced to return to poor conditions in the private rented sector. Although subsequent subsidies brought rents down, Corporation Housing remained out of the reach for many working people. Ernest Simon, the driving force behind the construction of the Wythenshawe Estate, commented in 1933 that “Manchester has hitherto been housing the middle classes and the aristocracy of labour, and has done almost nothing for the lower paid workers”.

In the 1980s further change came, when Thatcher introduced Right to Buy and council tenants were able to buy their homes. Much of the Corporation Estate passed forever into private hands. Residents we interviewed who bought their house through Right to Buy in the 1980’s were strongly motivated by the desire to keep family members together in a community with networks of support or feared of losing a tenancy though the death of a parent.

In this way, the legacy of Manchester's municipal vision endures. Quality housing with long term tenancies, affordable rents, and a high standard of repairs and maintenance under Manchester Corporation underpinned the stability of the community to make Burnage a place called home for almost 100 years.

Today, in an era of great transformation of housing in our city, characterised by an explosion in luxury apartments in the city centre and an ever-growing waiting list for social housing across the city, we must find inspiration in the stories of our cities past. Housing must again be provided as a public good — not a private luxury. The challenge of our times is to build an egalitarian municipal vision for the next century.

If you’d like to know more about the History of the Corporation Estates in Burnage and beyond we have two free, online events coming up:

Municipal Dreams: The Rise and Fall of Council Housing  by John Boughton

A City Speaks 1947 an idealistic vision for post war Manchester

Amanda Wait is the Development Officer at Burnage Library Information and Advice Hub and Project Manager of Burnage: A Place Called Home.

Homes, health and the pandemic: how housing conditions in the north of England made lockdown unbearable

5,000 students are going on rent strike: on the past and future of our movement