We’re at a critical time in Manchester’s urban development, with its city centre boom continuing since 2014 at the same time as the city’s model of property-led regeneration is coming under challenge both inside and outside the town hall. Building on GMHA’s previous research into financialisation, our latest report examines the extent to which growing concern about affordability is matched by genuine action on the ground.

Last year’s investigation into financialisation in central Manchester and Salford last year exposed a city-region where development in the city centre routinely fell short of affordable housing requirements. It also highlighted a murky world, where details of land deals between local authorities and developers were difficult to trace and failing to be democratically scrutinised. The new research updates this work, examining developments in Manchester city centre over the last year to assess the extent, if any, to which this situation has changed.

The report analyses the schemes in Manchester city centre that received planning permission in 2018/19, assessing 10 developments which if built will account for over 3,200 new flats and apartments. In addition, we evaluate recent changes in affordable housing and planning policy announced by Manchester City Council and provide an update on the rise of new housing products such as ‘co-living’, Air BnB and purpose-built student housing, the implications of which remain in need of in-depth study.

Our research shows that as the council has come under pressure from housing activists, campaigners and backbench councillors, there have been incremental improvements in affordable housing policy in the city-centre and beyond. In contrast to recent years, 75 percent of eligible city centre developments now have affordable housing requirements attached to them as part of receiving planning permission, agreed under ‘section 106’ of the Town and Country Planning Act 1990. City-wide, the council also made new promises to hit its 20 percent target across Manchester in upcoming years, financed from a range of sources including government funding and affordable housing requirements, though only a limited proportion of this will be social housing.

However, in those new successful planning applications we studied there is still a failure to address  the city’s 20 percent policy target for new development, and almost none are required to be built ‘on site’ as part of being incorporated into a development (on site provision has risen from zero percent to 0.7 percent with inclusion of 16 units in Swan House). If this continues, it will likely do little to address concerns that the city centre boom excludes people on low incomes, risking further gentrification in what is already a highly unequal city. 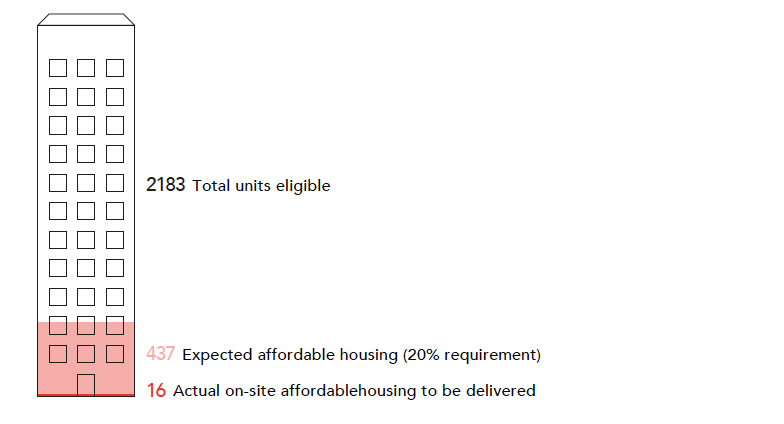 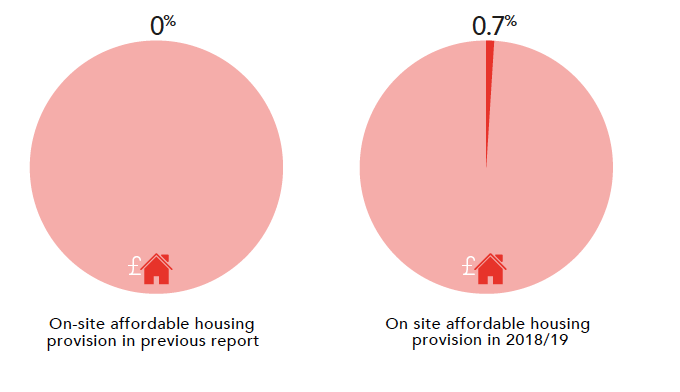 Meeting the 20 percent target across the city as a whole, while welcome as a goal (that still has to be delivered), is arguably unambitious given previous needs assessments that recommended a target of 30% in 2007[i], half of which would have been social housing, and is belated given the chronic housing crisis that has been experienced by many of Manchester’s residents. With the government recently cutting £10 million in funding for new social housing for the city, and the number of households in temporary accommodation being housed by private landlords at unprecedented levels, it is important that more is expected from developers and their financial partners who extract millions of pounds of rents from land and housing in Manchester.

There has also been steps towards greater transparency in urban development. This has been achieved in the publishing by the council of so-called viability assessments since November 2018. Reports used by developers in negotiations with councils have faced national criticism for using loopholes to avoid meeting affordable housing targets. Transparency is still limited, with only one development to date having a summary and explanatory narrative that is easily accessible on the council’s planning portal. It is notable however that this development, that of the Swan House in the Northern Quarter, is notable for having the highest on-site contribution in our sample, with 5 percent of its flats set to be affordable.

Land deals by the council remain hidden, undergo little in the way of scrutiny and highlight a discredited way of undertaking urban development. For example the financial data regarding the disposal of public land to Renaker as part of the Elizabeth Tower development in Castlefield remained undisclosed in planning documents. While the money received by the council could be used to fund affordable housing, without further information and transparency it is impossible to assesses against key criteria. This includes whether the public is getting a good deal on such transactions, whether the land could have been used for alternative social and community-led purposes or what the council intends to do with the money.

The research also showed new types of rental tenure that are being targeted for development in Manchester by an ever-growing number of the world’s biggest financial actors, including the investment bank Goldman Sachs, the consequences and nature of which are under-researched and poorly regulated. Co-living is being marketed by think tanks such as the Social Market Foundation as a type of affordable housing, aimed at enabling young graduates to share accommodation space, a claim we find questionable in the report given the profit-making nature of such schemes.

Pressure is having an effect, with important changes over the past 12 months in Manchester’s housing policy in central areas of the city and more broadly, alongside incremental improvements in the planning regime. Our research shows however that many of the underlying drivers of financialisation remain in place, transparency remains limited, and the increase in affordable housing provision in Manchester city centre is at startlingly low levels given high levels of need in the city.

Manchester’s real estate boom since 2014 has attracted new types of financial actor into the city’s built environment and significantly increased the number of developments built specifically for private rent. Media reports over the past year[ii][iii]have revealed signs of potential oversupply in the number of city centre apartments, with a slump in the market likely to have consequences for the city’s fragile economy. If affordable housing is not built now, then this current boom is likely to be a wasted opportunity for decades to come.

With an as yet unknown number of demolitions of existing social housing likely planned as part of the ‘Northern Gateway’ redevelopment of Collyhurst, fears have been raised once more of state-led gentrification as the city expands. New policies governing affordable housing, including a forthcoming update of Manchester’s Local Plan once a Greater Manchester Spatial Framework is agreed, should be important strategic targets for housing activists in the city in the coming year.

There are opportunities for building a different city, with public land such as the former Central Retail Park in Ancoats offering the chance for alternative uses such as social and community-led housing and urban green space. Expectations of fresh thinking and new urban development models should be raised by the new GM Housing Strategy, which explicitly recognises the need for community-based alternatives to gentrification. Such changes will rely on councillors pushing for an end to a city that puts developers before people and engaged, critical, and powerful organising by social movements and housing activists.

[iii]Gouk, A., and Miller, C. (2019) ‘Is the Bubble About to Burst? Sales of Flats Are Plummeting in Manchester’. Manchester Evening News
(https://www.manchestereveningnews.co.uk/news/greater-manchester-news/bubble-burst-sales-flats-plummeting-15689279)